In this block post I will describe my opinion about IPFS. I think it has the potential to become the next big thing in the internet area.

What is IPFS (InterPlanetary File System)?

IPFS are many things together. The easiest way to understand ipfs is to say, that it is a decentralized replacement for HTTP/S.

In more details IPFS  is the following:

In the following picture you can get a brief technical overview what IPFS and IPNS are technically doing: 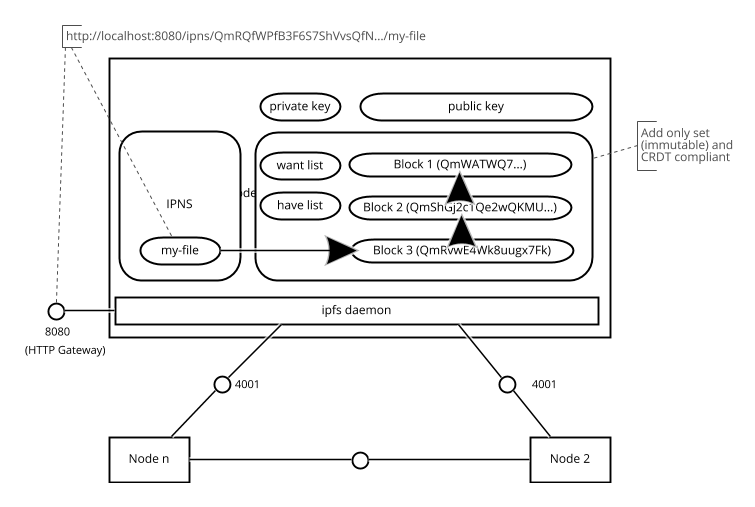 For details consult the whitepaper.

What is IPNS (InterPlanetary naming system)?

IPFS contains immutable data structures. These data do never change. Unfortunately to track e.g. news or current sensor data it is necessary to have some mutable data that updates the references and gives the content a human remembarable name. For this purpose IPNS was invented. It is inspired by SFS and is compatible with given services like DNS.

Why do I think it is a game changer?

IPFS is well engineered and builds on a lot of very successful concepts like git, peer-2-peer, HTTP etc.

It can distribute data a lot faster than HTTP and solves other problems like partition tolerance and deduplication.

It tries to be downwards compatible to HTTP and normal file systems. This makes the adoption a lot easier and saves a lot of investments that companies already did in their infrastructure.

The main author Juan Benet is a awesome smart guy who knows that it is very important to build on other ideas. Further he is good at marketing his ideas e.g. he explains IPFS in the following TED talk:

Juan founded the company Protocol Labs that got 3 mio $ of funding. He is based in silicon valley with a lot of bright minds around him.

IPFS is the new kid on the block for decentralized data sharing. It is amazingly well engineered and as an open source project there are a lot of contributers. It comes with two reference implementation and has already shown some traction.

1 thought on “IPFS the next generation internet procotol technical overview”

This site uses Akismet to reduce spam. Learn how your comment data is processed.